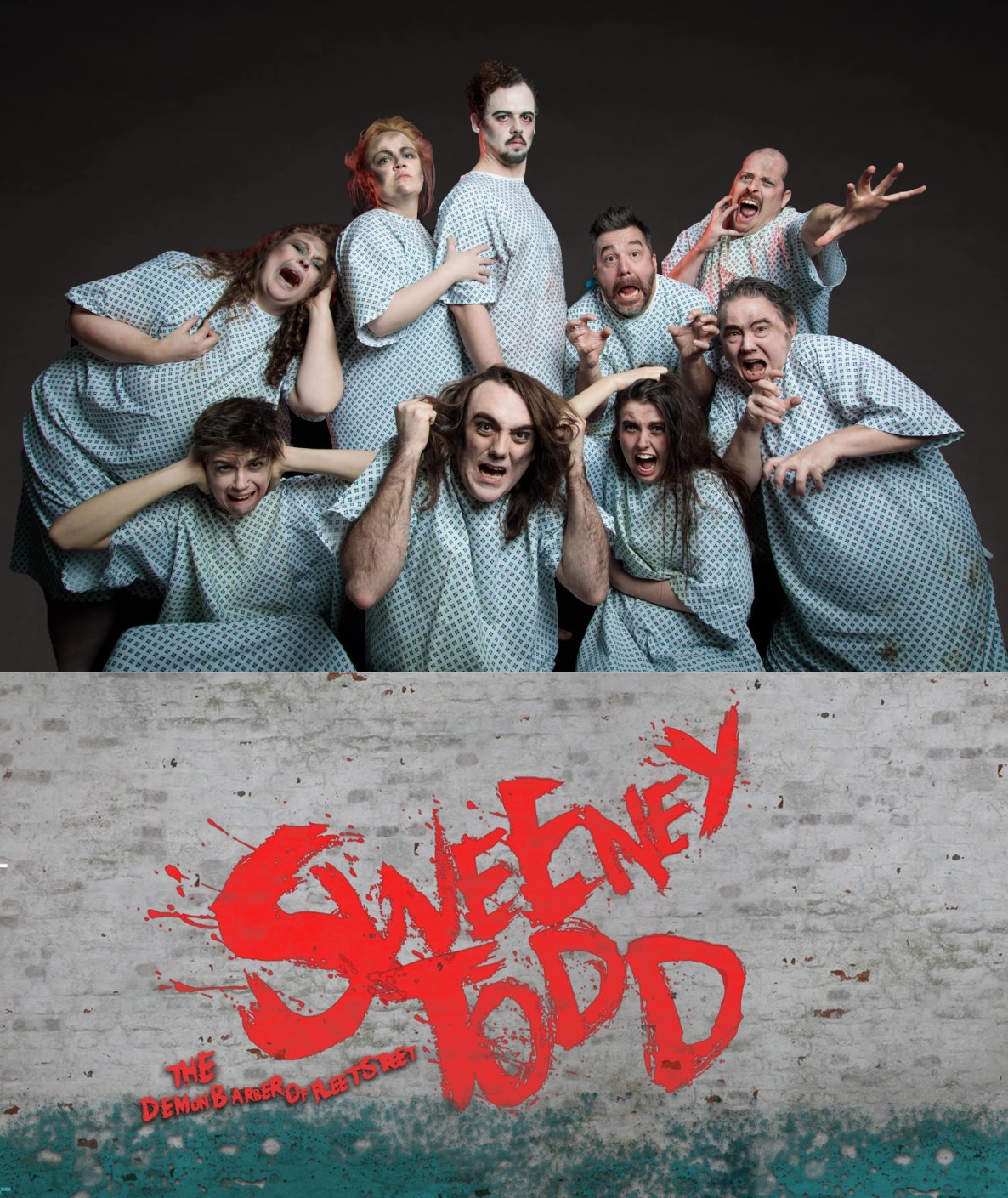 This one was a little bit special.  Every production is special in some way or other, but this one did feel a bit beyond the normal.

It was our first show coming out of 2 years of the Pandemic.  Our 2020 production of H.M.S. Pinafore had to be cancelled a few weeks before making it to the stage.  So our previous show had been 2019.  The long hiatus meant something in itself, but in addition all of us had gone through challenges, some small and some great, over the 2 years.  We started rehearsals in September 2021, very conscious of safety.  The early music rehearsals were spent with masks still on.  As the months past, the dangers subsided and the masks became less important.  From my side, that act of being with people again, in the same space, interacting and participating, was profound.  So this one was a little bit special.

The group had evolved a bit since our 2020 almost show.  There were lots of new faces and fewer known faces.  The "new" were welcomed with open arms, even if many of them seemed vibrant and energetic and young (I was suddenly very much one of the oldies of the company).  The "known" who did not (yet) return were sorely missed.  There was the pang to see people again who had been with us so many times in past years, the yearning to get straight back into enjoying making music together again.  You naturally feel safer and more comfortable working with people who you know and immediately trust.  The slight pang of sadness never quite left, but the "new" were so open and involved, everyone became part of the "known" and trusted.  They just threw themselves into everything with such gusto!  So this one was a little bit special.

This was Sweeney Todd.  For some, this was a good reason to miss this production, as it is too extreme a piece to be everyone's cup of tea.  For others, though, it is a tea to be enthusiastically imbibed and savoured any chance you get.  It is challenging.  It has a lot of music to learn that is often complex and quirky.  It is dramatically extremely satisfying.  For those who chose to drink, this one was a little bit special. 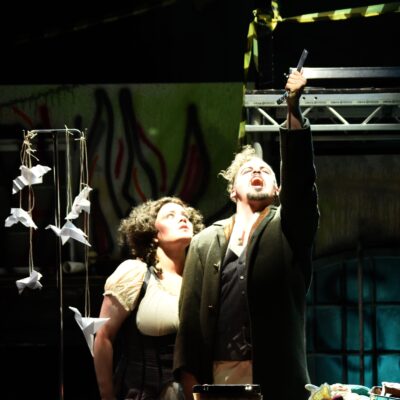 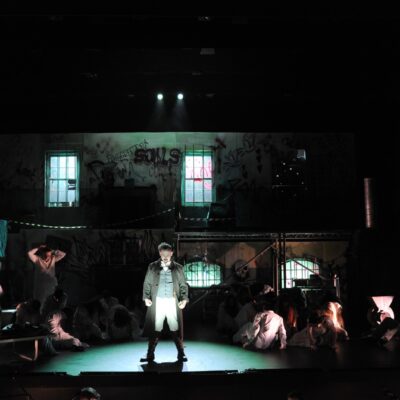 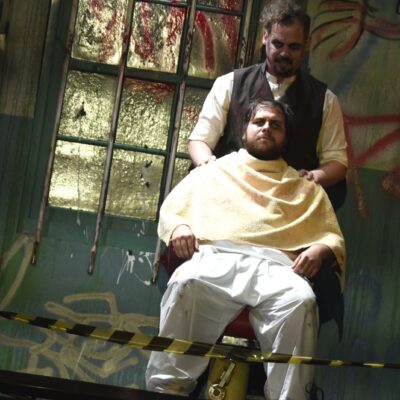 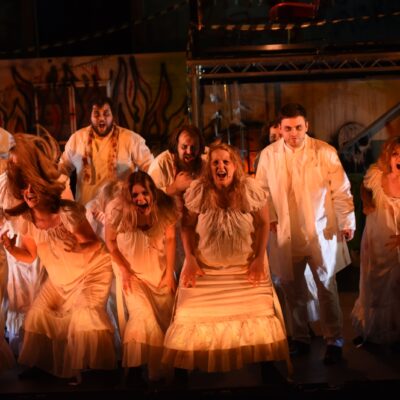 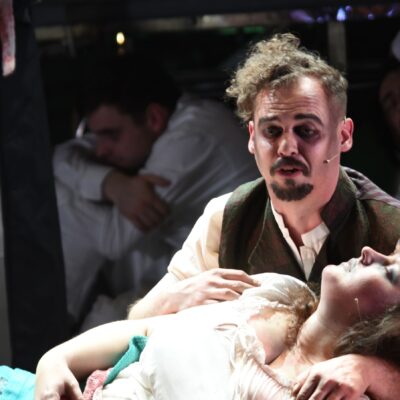 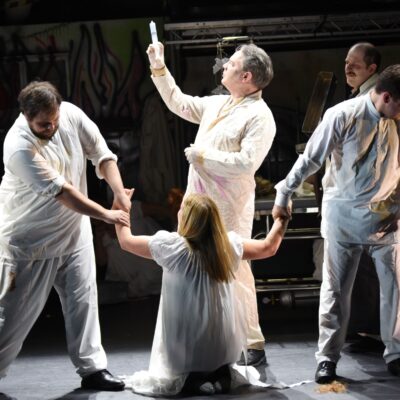 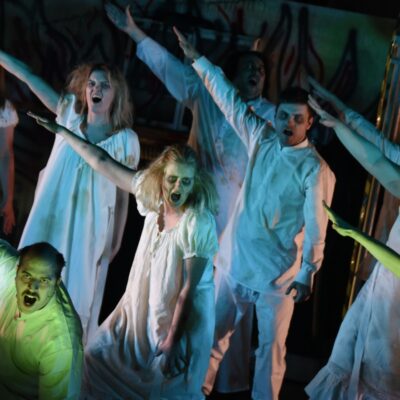 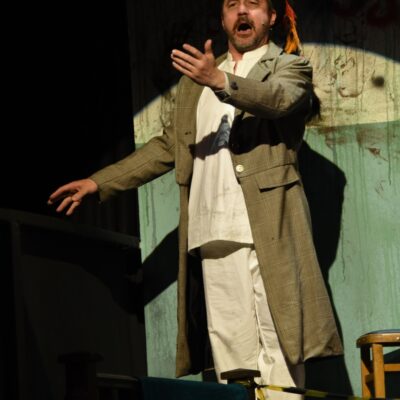 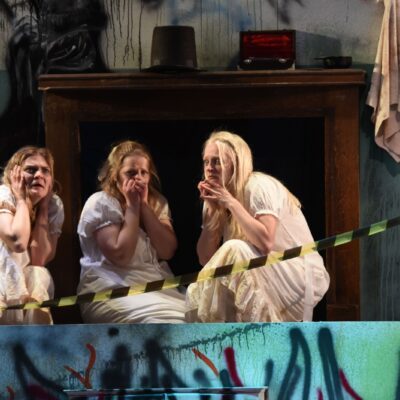 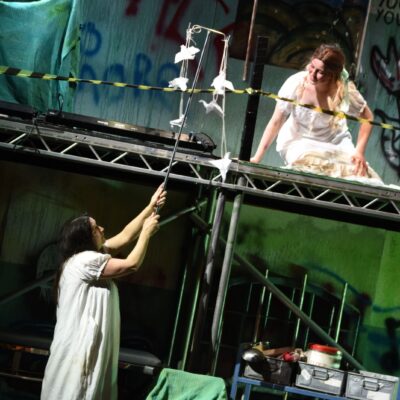 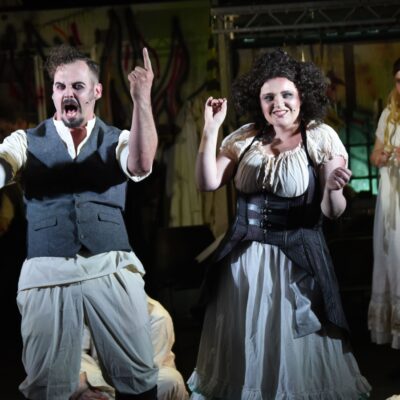 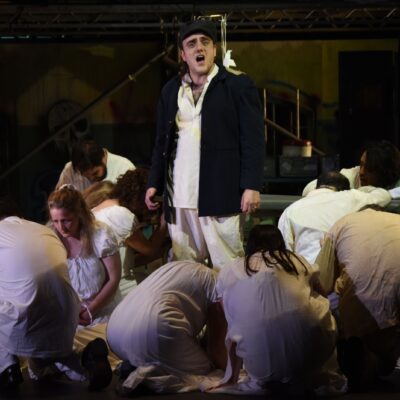 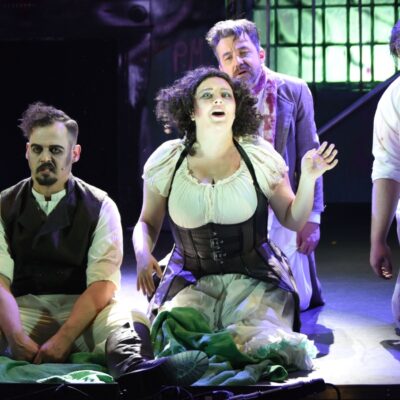 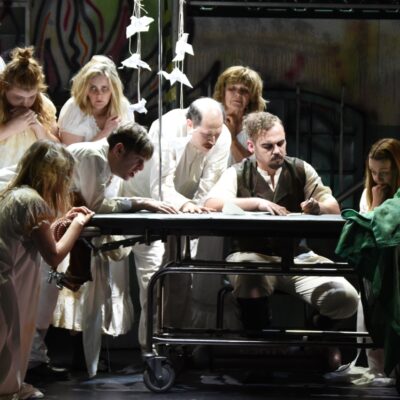 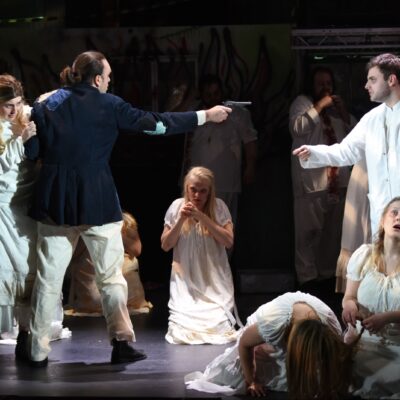 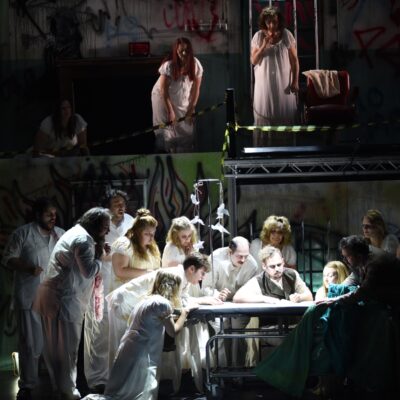 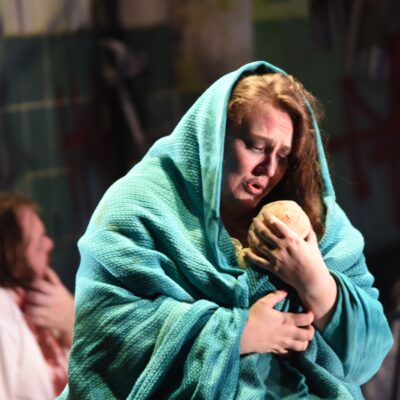 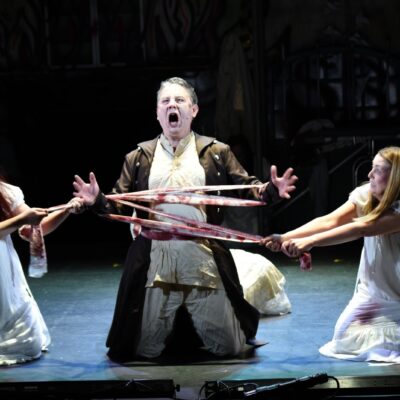 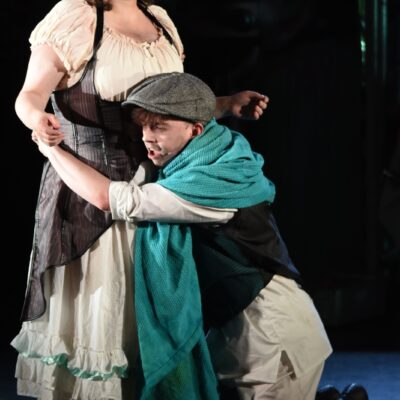 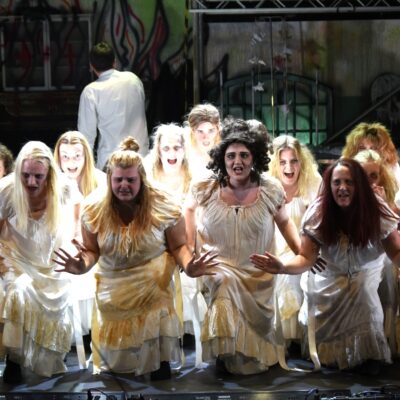 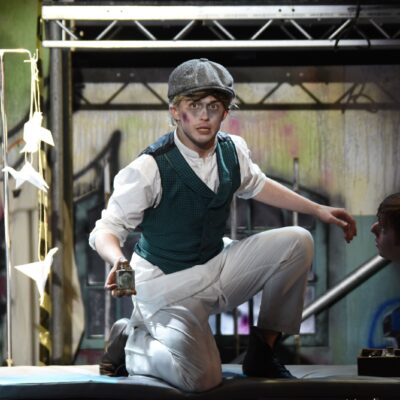 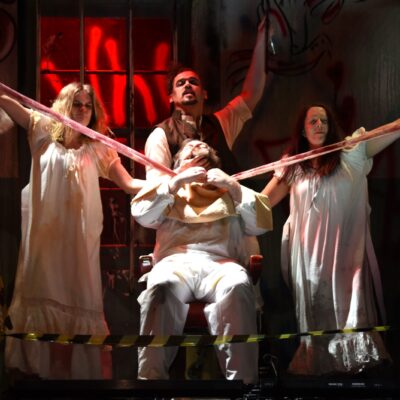 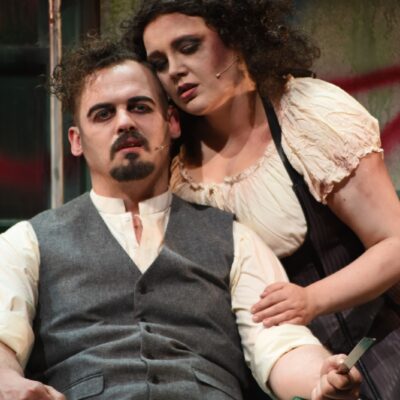 Every show we do has an army of people in the background making everything work.  For this show the team stretched further and worked so hard to make the production look, sound, and feel a little bit special.  Chris, Matt, Matt (a different one), Aly, Paul, Emma, Judith, Judith (a different one) and Anita, and so many others did so much to make it a show to remember.

As an example, here is Matt explaining the length and depth of thinking that went into the design process.

‘SWEENEY TODD’
The Carriageworks Theatre, Leeds Thursday 28th April 2022
I couldn’t help thinking, while watching this amazing production, that somewhere in the musical heaven, Stephen Sondheim was looking down with approval and happiness at the Carriageworks stage, for here was all he ever wished for – his work given such clarity and resonance. I, for one, am a Sondheim devotee – I have seen this musical many times (and in many genres) and I couldn’t wait to see this production.
The Artistic Director, Anita Adams, has once again entertained audiences this week with a new vision of one of Sondheim’s most iconic musicals. Set in an historic asylum, this was indeed an ensemble piece of theatre. It began with the inmates drawing us into a helter-skelter of white-robed terrifying images, with a set comprising of hospital beds, graffiti and general bedlam!
The story was so well told – Sweeney, played brilliantly by Jason Weightman, was a towering presence – his diction was perfect and musically, absolutely overwhelming. It was quite clear from the outset that he would avenge his wrongful imprisonment in Botany Bay, the apparent death of his wife and the knowledge that his daughter, Johanna, (played strongly by Anna Halliday) had been made a ward of the evil Judge Turpin (played to perfection by Richard Pascoe). Helping Sweeney in all of this was the indomitable Mrs Lovett (played toweringly by Jasmine Caine) – the scenes between her and Sweeney were breath-taking. A side story of Sweeney’s shipmate, Anthony (also played strongly by Kristian Cleworth) who falls in love with Johanna, added another dimension to the story, as did the Beggar Woman (Emma Kennedy) and The Beadle (Matthew Oglesby). Tobias (played by an enthusiastic Danny Kelly) brought a little light relief to the piece, as did Pirelli (Matt Stirk).
I have such admiration for Anita’s production touches, which brought this production up to professional standards – instead of gallons of blood in the throat-cutting scenes, she used ensemble members to throw up strips of red cloth – we all began to dread the appearance of these, as it meant another killing was on the way! Mrs Lovett’s pies did look rather tempting, until you realised what ‘meat’ they contained! I particularly loved the paper birds to denote the imprisonment of Johanna by the Judge. Anita changed the usual trick barbers chair, which shot the victims into the cellar, by dragging them into the fireplace, where they slumped out into the grate below, sometimes only half-dead – wonderfully gruesome!!
Musically, this has got to be one of the best interpretations of Sweeney that I have listened to – Adam Boniface, as Musical Director, produced a wonderful sound that never drowned out the singers and yet gave that eerily discordant sound, so right for the action – I was so impressed with his orchestra of mainly young musicians – what a credit to musical theatre they all are!
This show is truly an ensemble piece – all the characters played so well and consistently kept up their characters all the way through – twitching, frightened, moving around the set confidently – this was so obviously well- rehearsed. The energy coming from the stage was palpable.
Backstage credits go to Matt Stirk (Set Design, with Anita Adams), Stage Manager (Paul Myers), Backstage (Simon Futers & Paul Myers), Assistant Musical Director (Tom Mitchell), Lighting Design (Chris Newsome) Sound Design (Aly Howe) Properties (Judith Smith & Matt Stirk) Costume & Makeup (Judith Huntley, Pat Kearney, Emma Stirk and Joy Suthern) Publicity (Emma Kennedy, Jasmine Caine and Society members) Graphics (Matt Stirk and Matthew Oglesby) Photography (Matthew Oglesby), Programme (Matthew Oglesby, Becky Barwick and Katie Lister) – last, but not least, Front-of-House Manager (Richard Naylor). I mention these hard-working souls, without whom, the show could not go on!
Once again, my heartfelt congratulations go to not only to the superb talent of Anita Adams, but also to the entire company of Leeds G&S – your hard work has paid off in spades this week at the Carriageworks - this production of Sweeney Todd will remain in my heart for a very long time.
Christine Castle
NODA NE Regional Representative – District 9 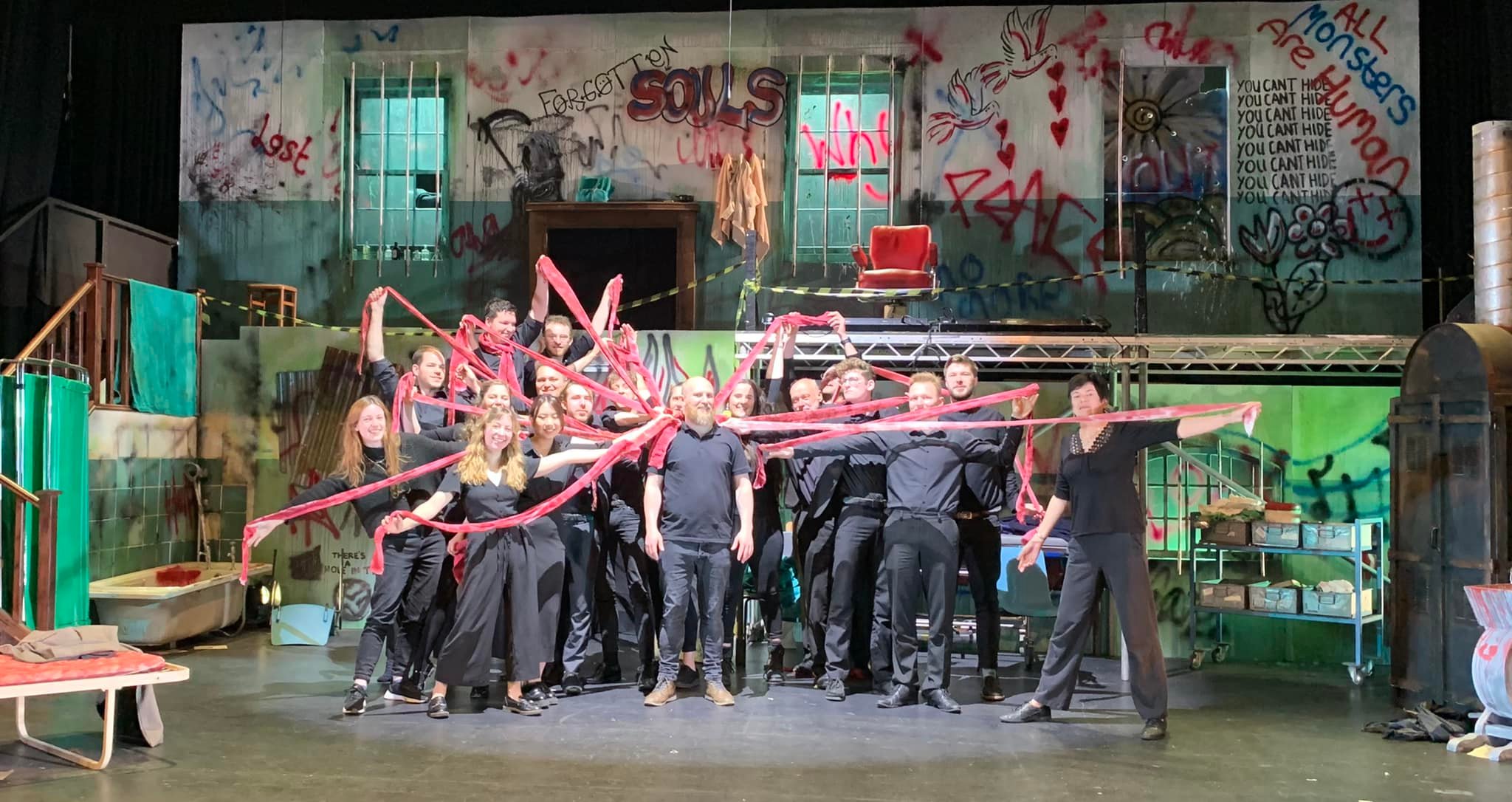 An Orchestra getting their own back!

This was an elite crew of musical maestros.  For a number of reasons they came together quite late (e.g. Elizabeth, our flautist, was a late emergency replacement on the Sunday of show week), but took on the tough Sondheim music with skillful alacrity.